Get fresh music recommendations delivered to your inbox every Friday.

In Your Heart You Know She's Clarke and the Himselfs

by Clarke and the Himselfs 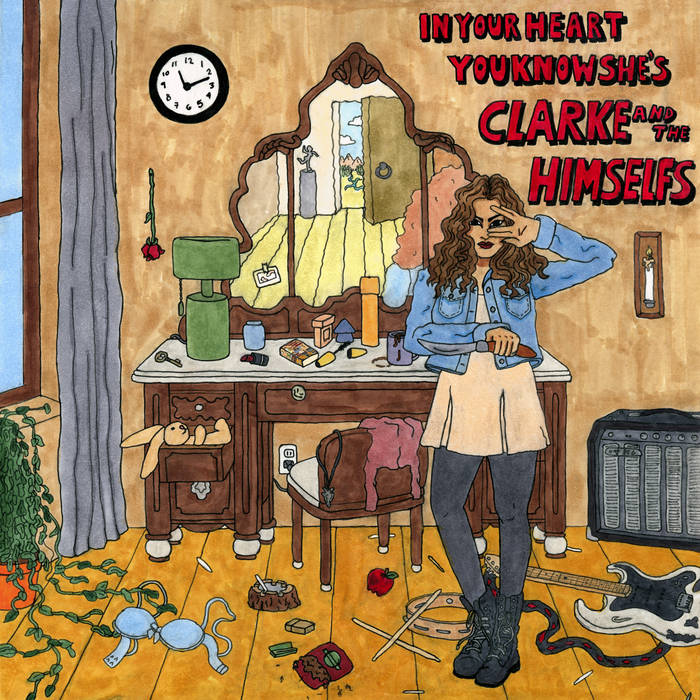 jjj Everything about this album is great. Favorite track: Seeker Brain.

Produced by Tuck Nelson and Clarke Howell
All songs written by Clarke and the Himselfs
except Earthquake, written by Cody Critchole performed by Ssion
and The Night They Drove old Dixie Down written by Robbie Robertson performed by Levon Helm and The Band
Mixes, Masters, and Additional Overdubs by Tuck Nelson at Brick House Studios in Tottenham England
Additional Guitar on Old Fiend performed by Doug Martsch
Artwork by Miza Coplin
1,3,6,7, Recorded at the Gem House in Newport, Oregon
2,4,5 Recorded in the Champion at Sou'Wester Lodge
Reading of Asteroid by Phil Galucki in New Orleans, LA
9 Recorded at Greg's house in Portland featuring Greg Olin on Drums, Samuel Farrell on Bass, Clarke Howell on Piano, Additional vocals by Neisha D'Souza, Zack Barbery, Shay Roselip and all the above.
Hand made tapes by Curly Cassettes. CC91

Thanks to Delavan Kromer, Isa Rivero, Meghan Cahill, Sara Mclean, Ellie Workman, Lara Harper, Demmi Netson and Elizabeth Venable for being so supportive. Thanks to Brett Netson for holding down the fort. Thanks to Eric Penney, Mike Stivers, and Jordon Rush for letting me stash my things in their houses. Thanks to Samuel Farrell especially for use of the Champion, and also to Kathy Duffy and everyone at the Sou'Wester Lodge. Most especially thanks to Curly Cassettes for releasing this and over 800 individual C&TH tapes thus far. Thanks to the members of Au Dunes (Neisha D'Souza, Zack Barbery, Greg Olin, Sam Farrell) for recording 'T.N.T.D.O.D.D' and to Shay Roselip for taking video and singing; thanks especially to Greg for use of his magical house. Thanks to Doug Martsch for being so into adding Guitar to this album. Thanks to Mom (rip), Dad. Thanks to Miza Coplin for Hail Marying the artwork and for being modern Hieronymus Bosch. And most especially thanks to Tuck Nelson with whom this album would not have happened, and which came out about rather organically and spontaneously in the early days of January - I met Tuck when he was 10 and I was 11 and literally the first thing we did was make music together, that we are still doing the same thing 17 years later is something I am forever grateful for. Thanks to Keith Zimmerman for believing in magic. Thanks to Laura Jane Grace and Genesis P'-orridge for being Heroes and for having a conversation and giving me enough courage to come out as transgender and be who I always felt I was. Thanks Rock and Roll and Little Richard. Thanks to Humanity and Reality for being such a bitch, without which I would not have anything to write about. This album was written, recorded, mixed and mastered in January, February, March of 2017. Released in March of 2017.

Bandcamp Daily  your guide to the world of Bandcamp

Damu The Fudgemunk shares his recent collab with Def Pressé, plus jams from Common and more